Greg:    Welcome to this edition of the Houston Custom Home Builder podcast series brought to you by Houston’s leading luxury construction team, Morning Star Home Builders. I’m Greg, your host, and for today’s episode, we are joined by two of Houston’s best-known and most-accomplished custom and luxury home builders, Ted and Yvonne Cummins. Good to talk with you both this morning. How are you?

Greg:    Good morning. Sorry, talked over you there. In one of the last podcasts we talked about, you mentioned that there is a new subdivision or new project that you guys are working on that you’re excited about. I think it was the golf course that Tiger Woods is planning or it’s the first one he’s planned. Was it Bluejack National? Was that the name of the subdivision?

Yvonne:    Yes. That is correct. It’s in Montgomery, Texas just northwest of the greater Houston area.

Greg:    I think that you guys were excited about this new project and I think either you’ve recently started a home or you’re about to start a home, but I’d love a little background information on this. 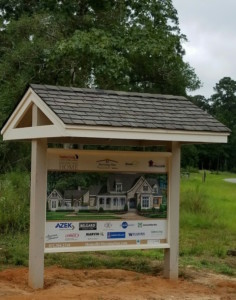 Yvonne:    Certainly. Morning Star Builders has been a part of the Southern Living Builder Program for about five years and that program gives us the opportunity to showcase the work that we do, requires us to use the National Southern Living sponsors. For example, Sherwin-Williams paint, Lennox HVAC, Belgard Pavers, that sort of a thing. We’re really excited because we had a groundbreaking ceremony a few days ago to showcase the beginning stages of this home in Bluejack.

Greg:    Let me back up real quickly. You walked right by the Southern Living Builder Group like it was nothing. That’s pretty hard to get into, right? That’s not something that everyone just says “I want to do it.”

Yvonne:    You’re correct. Southern Living Magazine, of course, is a very powerful brand in the Southern market, and so needless to say that they do do quite a bit of screening and reviewing in order to allow a builder to become a part of their program. They vet various builders. They are looking for people that have built homes for clients that have good customer service. They’re very architecturally detailed, and they want it to be something that their brand could align with.

Yvonne:    We have been most fortunate to be a part of that program.

Greg:    Are you saying that’s what opened the door for you to participate with the Bluejack National home you’re talking about?

Greg:    Okay. Is this something that’s already been designed? Are you just getting started? Where are we in the process?

Ted:    Actually, we tried to do a groundbreaking several months ago. I guess you’re in Kentucky, we’re in Houston. We’ve had a little thing called weather occur. We’re literally in about a 45-day period, we had almost 30 inches of rain.

Ted:    We have had quite the challenge getting the house in and under construction and getting the slab in to time this with our event. We actually did the groundbreaking, but we’re already in framing, so we didn’t quite get it in the order of normality. We did the groundbreaking, which was a great time. Yvonne will talk a little bit more about that. The slab is in and we have the first and second floor framed. The garage is framed. The guesthouse, we’re in the middle of framing as well. I can talk a little bit about the house whenever you want to hear about it.

Greg:    I’ll let you guys decide which one goes first, the groundbreaking or the house, but I’m curious to hear about it all. It sounds like quite the project and I’m just a curious guy who likes to hear about beautiful homes.

Yvonne:    We are excited about this project. We had a groundbreaking ceremony with about 40 people there. This home is actually already sold, so the client that is purchasing it, their family was able to be a part of the groundbreaking. Their children actually got to shovel some dirt in celebration of this. 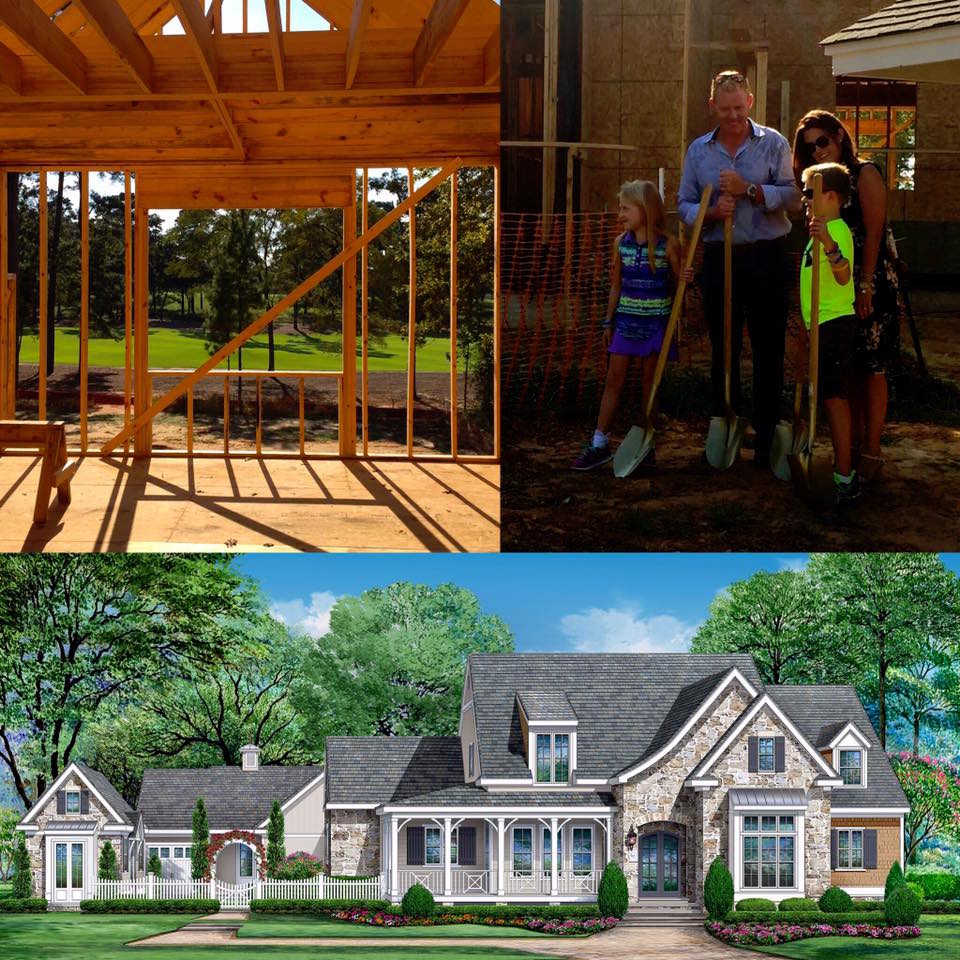 We also had people from Chamber of Commerce, national Southern Living sponsors were there as well, as well as the Morning Star team. We were able to celebrate this event. Also, Bluejack National rolled out the red carpet for us and for all of the attendees, and so we were able to get a taste of what Bluejack is and will continue to be.

Ted:    The course is already complete. They’re already playing on it. It’s been under construction for the last, I’d say, year and a half or so. We’re talking about 755 very much rolling acres of hills and piney woods near Montgomery, Texas. For the readers and listeners who only know flat Houston, they need to venture out northwest and see what topography changes. There’s actually over 200 feet of elevation drop on the course, which is very, very different than most of flat Houston, Texas.

Greg:    Is Tiger going to come every once in a while and check out the course and make sure it’s playing well and maybe check out some of the homes, who knows?

Ted:    Who knows? They did have a groundbreaking ceremony or a grand opening ceremony for Bluejack several months ago, in April, and we attended that. There was about 750 people that came. Tiger was there and I think he played about nine holes, part of the course, and he was very excited. It’s interesting that he selected this location to have his first golf course design in the entire United States. We’re extremely excited about being associated with the community that has that kind of reputation. It’s really the beauty of the topography in Bluejack.

Greg:    You’re talking about the topography and I understand nothing’s typical and real estate’s all different, but is there a typical or average lot size? You said it’s all rolling, so is that individual lots are going to be rolling or some are flat, some have some movement front to back? What do the building sites look like?

Ted:    Good question. The majority on the course have topography on them because obviously that’s what the golf course looks like. The ones off the course, some are also rolling, some are more flat in nature, so it’s really a mix. The lot sizes range from a half acre to three-quarter acre in size. They’ve got lots on the course and off the course. Obviously, there’s probably a little more price difference between those on the course and those off. What’s also unique about Bluejack is they’re going to be very much a family and amenities… there’s a whole host of family amenities in addition to simply playing golf, which is going to be a big attraction to families.

Greg:    Like a clubhouse and pool? What are you talking about amenities for families?

Ted:    Yeah. It’s really going to be a very, very special place. Again, we’re very excited with the things that they’re going to be doing and being a part of. It’s very much going to be a family place to get away.

Greg:    Once it’s done, how big is Bluejack National Community going to be?

Ted:    I think they’ve estimated around 400 residences in the community. It is a private course, so you have to become a member to play there. It is not open to the public. I’ll rabbit trail for a minute, I think when people come see our showcase house they’re going to get an added benefit of seeing the house but also being able to see a very private golf course community that they may have not been able to see before. I think there’s going to be a two-fold benefit of coming to tour the house next year.

Greg:    Do you have an idea of when you’ll open it up or is that something we’ll talk about when you get closer and can really pinpoint a weekend or whenever it might be?

Ted:    Yeah, at this point, we’re looking at summer to fall next year, 2017. I think to your point, until we see how weather treats us a little bit later in the year we’ll know more about that. 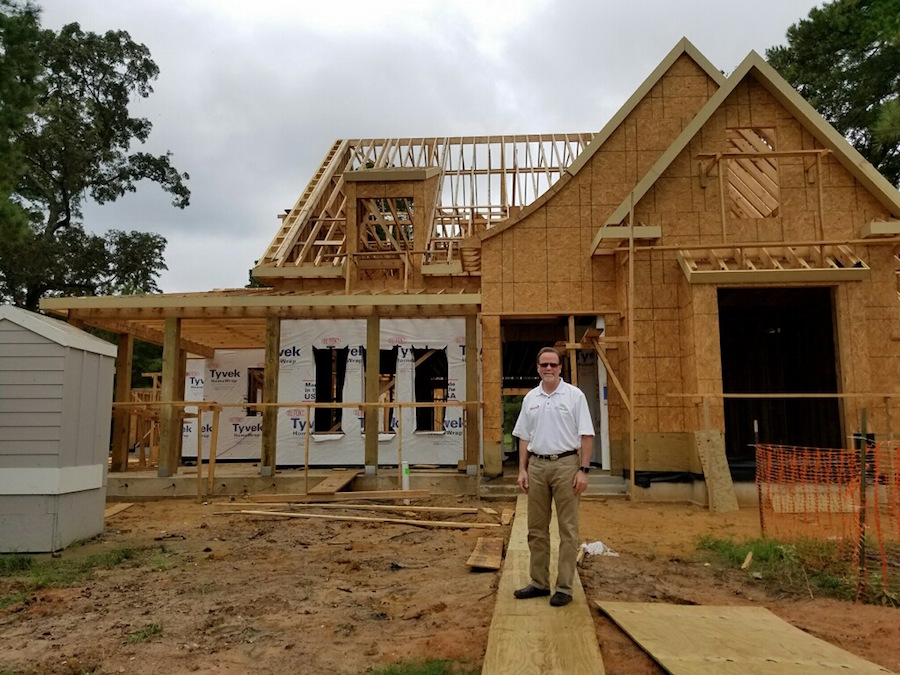 Greg:    Okay. If you want to talk about the house, you already started, or if you can give us an idea of what a typical house might be there on Bluejack, what size? It sounds like you’ve already built a two-story, you’re working on a two-story. Is that what we’re going to look at mostly?

Ted:    It’ll be a mix dependent on clients needs. This is a home that we took an existing Southern Living plan called the Elberton Way and then in Texas we call it we Texified it. I don’t know if you’ve heard of that term or not, but it’s called making things bigger. The home was more in the 3500 square foot and we got done with it it was almost 6000.

Ted:    Yeah. The first and second floor have about 5100 square foot living space and then we added with an L-shaped screened-in porch off the back, we added a 680 square foot guesthouse off the back. In addition to that, we’ve got over 2300 square foot just in garage and covered porches and in storage. It’s a three-car garage plus we built a detached freestanding golf cart garage that will house two golf carts because in this community more people will be getting around either walking or probably in a golf cart. We knew that would be part of the lifestyle there, so we designed a really fun golf cart garage.

Greg:    Is this one of the first homes going up there?

Ted:    Actually, it is. There’s ongoing other homes that are going to be more weekend and potential rentals for members, but this is actually the very first single-family dwelling being built in Bluejack and it’s our home.

Greg:    Wonderful. I love that. That means that when we come back on subsequent episodes of your podcast you can give us updates on maybe this home but also the entire project, give us an update on Bluejack National Golf Course Community.

Ted:    Absolutely. We’ll certainly talk more about the, I gave you the footage, there’s a lot to talk about of the features, the design elements. We’re very excited for some things we’ve not done before, which drives me and our company to continuing to pursue design trends where the public will see features they’ve not seen in other homes.

Greg:    That’s why I keep calling back couple times a month, you promise me I’m going to learn something every time I talk to you without fail, right?

Yvonne:    I might just mention that we have two charity partners that we will be working with on this 2017 Showcase Home project. One of them is Operation Finally Home and the other is Homemade Houston. When the tour is open for the public, the ticket sales we will be generating we will then be giving those donations to those two charities.

Greg:    Wonderful. I will make sure to link to those in the show notes, and I’m sure we will talk about the Showcase House coming up in weeks and months to come. I really appreciate your time today and I’m looking forward to following this house online and on your podcast.

Greg:    Thank you for joining us on this episode of the Houston Custom Home Builder podcast series. If you have any questions or would like to contact us at Morning Star Builders, you can find us on Facebook and you can always visit our website at homesbymorningstar.com, that’s homesbymorningstar.com. We appreciate your time with us today and look forward to bringing you another episode soon.