The Houston, TX real estate market is doing better than ever. This press release from MLS shows how the greater Houston area is booming at pre Millenial levels. Home prices are up, foreclosures are diminishing and inventory is low making Houston one of the best housing markets in the country.

HOUSTON — (January 15, 2013) — Sales of homes throughout the greater Houston area never let up in 2012, driven by a combination of strong local jobs numbers and historically low interest rates. December marked the 19th straight month that sales were in the black, and it was another month in which housing inventory shrunk and prices rose. In fact, both median and average home prices achieved historic highs as the year came to a close.
According to the latest monthly data prepared by the Houston Association of REALTORS® (HAR), December single-family home sales increased 11.4 percent versus December 2011. Contracts closed on 5,039 homes, driving inventory down to 3.7 months, the lowest level since December 1999.
All housing segments saw gains in December except for the low end of the market—those homes priced at $80,000 and below. Homes priced from $500,000 and above registered the highest sales volume and accounted for another hike in prices.
“2012 was a phenomenal year for the Houston housing market, thanks to the addition of more than 85,000 new jobs locally as well as continued low interest rates,” said HAR Chairman Danny Frank with Prudential Anderson Properties. “Market conditions have created excellent opportunities to sell a home in many parts of town, with some sellers receiving multiple offers. With less than four months of inventory on the market and continued demand, we could see further pressure on pricing until inventory levels pick up.”
The single-family home average price jumped 11.3 percent year-over-year to $243,797 while the median price—the figure at which half of the homes sold for more and half sold for less—rose 7.8 percent to $172,500. Both figures represent historic highs for Houston.
Sales of foreclosure properties continue to diminish, falling 24.0 percent compared to December 2011, according to the HAR Multiple Listing Service (MLS). Foreclosures currently make up 14.2 percent of all property sales reported through the MLS, half the share they comprised at the beginning of 2012. The median price of December foreclosures edged up 2.1 percent to $84,200.
December sales of all property types in Houston totaled 6,055, a 12.5 percent increase over the same month last year. Total dollar volume for properties sold in December soared 25.9 percent to $1.4 billion versus $1.1 billion a year earlier
2012 Annual Market Comparison
The Houston housing market concluded calendar year 2012 with strong gains in sales volume and pricing versus 2011. The heaviest one-month sales volume of the year was recorded in August, with 6,447 closings. By contrast, the lightest one-month sales volume of the year took place in January, with 3,039 closings. October marked the greatest year-over-year percentage sales increase, with a 30.3 percent gain over October 2011.
Single-family home sales rose 16.1 percent for the year and sales of all property types experienced a comparable increase of 16.3 percent. On a year-to-date basis, the average price climbed 5.4 percent to $225,330 while the median price increased 6.1 percent to $164,500. Total dollar volume for full-year 2012 jumped 23.3 percent to $16 billion compared to full-year 2011.
December Monthly Market Comparison
December was kind to Houston’s overall real estate market, with positive results across all sales categories compared to December 2011. On a year-over-year basis, total property sales, total dollar volume and average and median pricing were all up.
Month-end pending sales for December totaled 3,087. That is up 6.2 percent from last year and suggests continued gains are likely when January property sales data are totaled. Active listings, or the number of available properties, at the end of December declined 20.3 percent from December 2011 to 33,554.
Housing inventory in Houston has now fallen below a four-month supply, dropping in December to 3.7 months from 5.8 months a year earlier. That is the lowest level recorded locally since December 1999. Inventory of 6.0 months is typically regarded as constituting a balanced real estate market. For perspective, the national inventory of single-family homes is 4.8 months, according to the National Association of REALTORS® (NAR).
* Months inventory estimates the number of months it will take to deplete current active inventory based on the prior 12 months sales activity. This figure is representative of the single-family homes market.
Single-Family Homes Update

December sales of single-family homes in Houston totaled 5,039, up 11.4 percent from December 2011. That marks the 19th consecutive monthly increase. 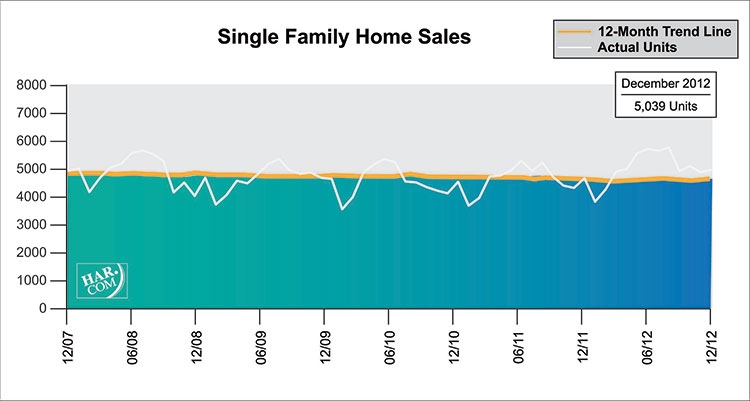 Broken out by housing segment, December sales performed as follows: 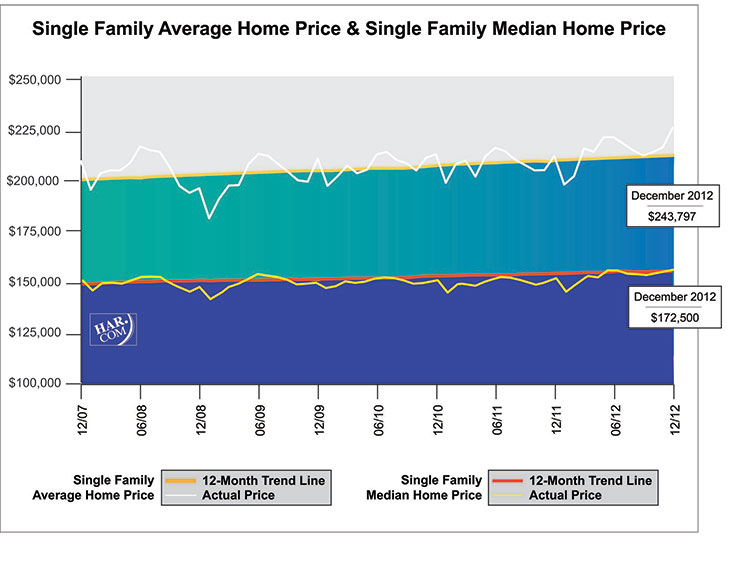 The average price of a single-family home rose 11.3 percent from last year to $243,797, the highest level ever in Houston. At $172,500, the median sales price for single-family homes also achieved an historic high, up 7.8 percent year-over-year.
HAR also breaks out the sales performance of existing single-family homes throughout the Houston market. In December 2012, existing home sales totaled 4,168, a 14.6 percent increase from the same month last year. The average sales price rose 11.0 percent year-over-year to $225,318. The median sales price increased 7.6 percent to $155,000.
Townhouse/Condominium Update

The computerized Multiple Listing Service of the Houston Association of REALTORS® includes residential properties and new homes listed by REALTORS® throughout Harris, Fort Bend and Montgomery counties, as well as parts of Brazoria, Galveston, Waller and Wharton counties. Residential home sales statistics as well as listing information for more than 50,000 properties may be found on the Internet at http://www.har.com.
The information published and disseminated to the HAR Multiple Listing Services is communicated verbatim, without change by Multiple Listing Services, as filed by MLS participants.
The MLS does not verify the information provided and disclaims any responsibility for its accuracy. All data is preliminary and subject to change. Monthly sales figures reported since November 1998 includes a statistical estimation to account for late entries. Twelve-month totals may vary from actual end-of-year figures. (Single-family detached homes were broken out separately in monthly figures beginning February 1988.)